Most of us love puppy kisses, so we generally don’t think about why our dogs lick. Dogs lick us because they love us, right? Well, it’s a bit more complicated than that. Here are a few reasons why your dog loves giving kisses! 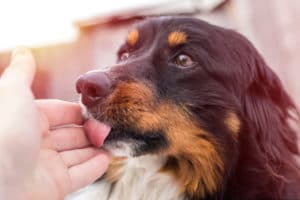 It’s true, many dogs lick to show affection. That’s why most of us call this behavior “giving kisses.” Licking to show affection is an instinctive behavior for almost all dogs. They first learn this behavior from their mothers and continue it because us humans reward them for it by smiling, laughing, or giving extra pets. Dogs instinctively prefer licking our faces, but if they can’t do that, they’re happy to lick our hands or any other patch of skin they can reach. Some dogs give lots of kisses throughout their lives, while others become more reserved as they get older. This is completely normal. It’s also normal for our dogs to lick their favorite canine friends, especially as puppies.

Dogs may also lick in order to get your attention. You may notice your dog licking you more often when he’s bored or lonely. The only way to stop licking for attention is to deal with the underlying problem. If your dog is bored, provide different chew toys or more exercise opportunities. Pushing him away, telling him “No” or any other punishments are still rewarding the licking. Negative attention is still attention, which is what your dog wants. Giving your dog something else to do is the easiest way to get this behavior under control.

When wolves, and sometimes dogs in the wild return to their pups after a meal, they regurgitate meat from the hunt. Since the pups are too young to hunt on their own, they learn to lick the meat from around the mouths of mom or even other adult pack members. Some scientists believe that this licking behavior has been passed down genetically, causing our domesticated dogs to do it sometimes. Baby puppies will often lick their mother’s mouth and face after she’s eaten a meal, so this theory seems valid. 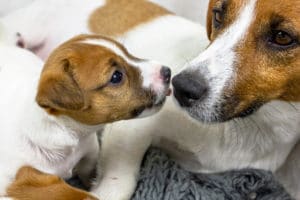 Dogs also instinctively use their mouths to explore the world around them. As strange as it seems, dogs may lick us to satiate their curiosity. Why wouldn’t they? We are a part of their world, after all.

Although OCD in dogs is rare, it can happen. Dogs with this disorder lick excessively, often as a result of prolonged stress and anxiety. The reason we often see this behavior in dogs who have OCD is because licking releases endorphins, which can cause these pups to feel more relaxed. In addition to licking humans, they lick random objects, surfaces, and even themselves because it helps them relax. If your dog is dealing with obsessive-compulsive disorder, consult your veterinarian for help. Your vet may refer you to an animal behaviorist. Generally, dogs with this disorder require intensive training and may be prescribed medication temporarily during the behavioral modification process. Your vet or behaviorist can help you develop a plan that works best for you and your dog. 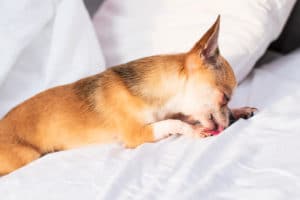 Is it safe for dogs to lick you?

Licking is generally not something to be concerned about. However, don’t believe the myth that dogs’ mouths are cleaner than humans’ mouths. That’s absolutely not the case! Our dogs’ mouths actually contain a lot of natural bacteria, which is why dog bites can be so dangerous. The only way licking could be a problem is if a dog were to lick an open wound. There are no documented illnesses that started with a dog licking a person. If you personally think licking is disgusting, that’s completely fine.

Can I teach my dog to stop licking? 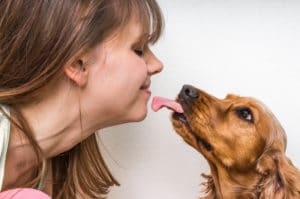 The short answer is absolutely, but it takes a lot of consistency and practice to teach a dog to stop licking. The easiest way is to ignore the behavior. When your dog licks, don’t give him any attention. Turn your head away from him when he licks, stop petting him, or even walk away if you have to. Denying your dog attention is the easiest way to stop the incessant licking, but you’ll need to be consistent. Make sure everyone in your household is on the same page, or the behavior will never go away. Remember also that patience is really important, especially when trying to stop an inherently rewarding behavior like licking.

Understanding why our dogs do the things they do is a lot of fun, but it also helps us communicate better with our furry BFFs. If you have any questions about this article, feel free to let us know in the comments! 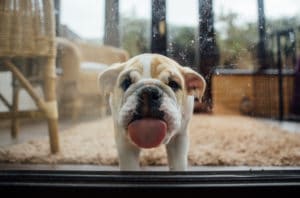 Categories: Uncategorized
Tags: dog kisses, puppy love, why do dogs lick so much Top 7 Fattest Dog Breeds Weight management has become a big issue in the United States, but not just for humans. Over 56 percent of… Shanna Stichler A few months ago, I took Diamond, my 8-year-old German Shepherd guide dog, to the vet, like you do. We were just there… Just as with humans, our dogs need regular exercise to help them look and feel great. However, the winter season can make it difficult to… Just as with humans, our dogs need regular exercise to help them look and feel great. However, the winter season or rain can make it…

Stats say 56% of dogs are overweight or obese and it’s not hard to see that when you are out and about. Pets in America…